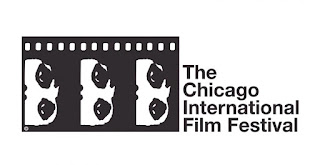 The Chicago International Film Festival is an annual film festival held every fall. Founded in 1964 by Michael Kutza, it is the longest-running competitive film festival in North America. Its logo is a stark, black and white close up of the composite eyes of early film actresses Theda Bara, Pola Negri and Mae Murray, set as repeated frames in a strip of film.