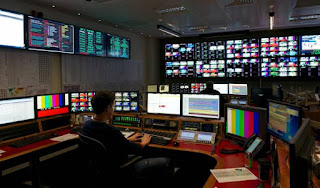 Wanting to look ahead to the future of all this, I researched, discussed and wrote a project in detail where I describe two important trends: innovation acceleration and growth of our uses of virtual environment.


So, here we keep innovating with this new concept, a new way to cover Film Festivals and above all a new way to build the Film Festival TV of tomorrow.
This channel will be a Business Platform for producers, distributors, exhibitors and television channels to facilitate B2B interactions among the film professionals.
Corporate as well as Independent Film makers and distributors/buyers will be able to buy and sell films through this platform.
Film Festivals are emerging trend in PAN-Asian Region, many Regional, National and International Film Festivals are coming up every year. Film Festivals in West are the part of corporate business. IFFTV will be an Asian concept covering the footprint of 70% of the world through Apstar 10 or Asiasat transponder.
No doubt, there is a huge scope for International Film Festival TV as a new concept. With my 20 more years experience in film, TV and publishing, I have come to realize that this is a very innovative project, which has identified a need in the market - best of entertainment for the global population and an opportunity for advertisers.
We can make this channel an internationally known 24-hour premium service that features 60% pure movies and 40% pure entertainment and fun related to cinema.
As the first and only TV Channel for Film Festivals, cinema and music this’ll get in the headlines with well planned projects, events and programs.
This’ll become the best option for the advertisers looking for global population.
No matter what the apprehension of the film industry, film is here to stay co-existing with television, video and other technological image-making devices. Film is likely to contribute its rich visual heritage and language to the electronic medium and may in turn make use of the newer technologies for furtherance of finer expression. Visual media is in its developing stage.
New products and concepts will be promoted through this channel.